Irish Yoga Association
The IYA has been delivering yoga to Ireland since 1978. 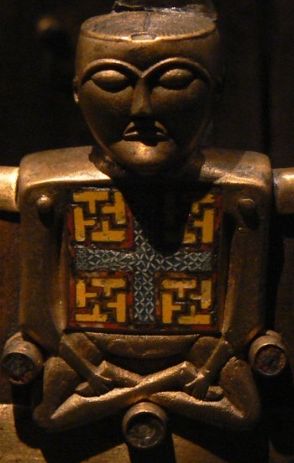 Cernunnus: ‘The Story behind the picture’.

When the IYA was formed in 1977 the Committee chose as our emblem and letterhead a picture of a little man seated in a lotus posture. The figure seemed to be old Celtic in style and I often wondered if there was a story behind the picture.

The first indication of his origin came when I saw the bookends made from carved compressed turf from which the drawing on our letterhead was taken. These are made by a firm in Co. Galway. The note on the back of the figure says it represents the old Celtic God Ceannus (Canice) and the original is in a Museum in Oslo.

[Added 2010: The full wording of the note on the back of the figure reads: Seated Figure. Worked in turf. After the figure with the appearance of the god Cernunnus. On a vessel found in the 9th Century Oseberg tomb. A fine example of Irish art, taken in a Viking raid and now in Bygdo Museum, Oslo. Owen Crafts, Ballyshannon, Ireland.]

Last Summer I spent a most enjoyable holiday in Scandinavia during which I visited the Viking Museum in Oslo. In a glass case I saw our little man. An exquisite blue and gilt enamelled figure, approximately matchbox sized, forming the embellishment on a bucket handle! It was described as ‘the Budda bucket, because of the Eastern appearance and posture of the figure – probably part of sacred items looted from a Church in Ireland 9th Century’.

I could quite see how the Norsemen got this impression but to me the face and decoration of the trunk is undoubtedly Celtic. The Eastern flavour is imparted by the unmistakable lotus posture. However, as the lotus posture is not claimed exclusively by any Yoga Master, it is quite conceivable that it was used by meditators of all religions. After all it brings the spine into the ‘right’ position for meditation and provides a solid platform for the trunk.

I have also found reference to Saint Ceannus who was an Irish monk in the eighth century. It seems likely that the bucket was indeed part of the sacred ornaments in a Church either used by or dedicated in honour of Saint Canice. Perhaps holy water was dispensed by the bucketful in those days?

As a footnote I learned from the Aer Lingus travel magazine that the town of Kilkenny is linked to Saint Canice as follows: Ceannus, Cainneach, Cill Chainnigh, Kill Kenny.

So you see our Association although only ten years old this year has links with old Irish history. As for myself the emblem is a reminder that I have not yet achieved a lotus posture. You see, I have these short fat hairy legs … but there is another story behind that picture!